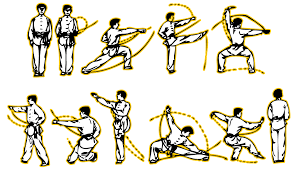 Chinese historical records, like Spring and Autumn Annals of Wu and Yue, the Bibliographies in the Book of the Han Dynasty, the Records of the Grand Historian, and other sources document the existence of martial arts in China for thousands of years. For example, the Chinese martial art of wrestling, Shuai Jiao, predates the establishment of Shaolin temple by several centuries. Since Chinese monasteries were large landed estates, sources of considerable regular income, monks required protection. Historical discoveries indicate that, even before the establishment of Shaolin temple, monks had arms and also practiced martial arts. In 1784 the Boxing Classic: Essential Boxing Methods made the earliest extant reference to the Shaolin Monastery as Chinese boxing’s place of origin. This is, however, a misconception, but shows the historical importance of Shaolin kung fu.

Bodhidharma is traditionally credited as the transmitter of Chan Buddhism to China, and regarded as its first Chinese patriarch. According to Chinese legend, he also began the physical training of the monks of Shaolin Monastery that led to the creation of Shaolin kung fu. In Japan, he is known as Daruma.

In 495 AD, Shaolin temple was built among the Song mountains in Henan province. The first monk who preached Buddhism there was the Indian monk named Buddhabhadra (佛陀跋陀罗; Fótuóbátuóluó), simply called Batuo (跋陀) by the Chinese. There are historical records that Batuo’s first Chinese disciples, Huiguang (慧光) and Sengchou (僧稠), both had exceptional martial skills. For example, Sengchou’s skill with the tin staff is even documented in the Chinese Buddhist canon. After Buddhabadra, the monk Bodhidharma (菩提达摩; Pútídámó), described as either Central Asian or South Asian (Indian) and simply called Damo (达摩) by the Chinese, came to Shaolin in 527 AD. His Chinese disciple, Huike (慧可), was also a highly trained martial arts expert. There are hints that these first three Chinese Shaolin monks, Huiguang, Sengchou, and Huike, may have been military men before entering the monastic life. 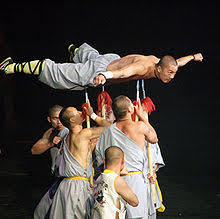 Some popular historians consider Bodhidharma, the first patriarch of Chinese Buddhism to have had a major influence on Shaolin Kung Fu.

The idea of Bodhidharma influencing Shaolin boxing is based on a qigong manual written during the 17th century. This is when a Taoist with the pen name ‘Purple Coagulation Man of the Way’ wrote the Sinews Changing Classic in 1624, but claimed to have discovered it. The first of two prefaces of the manual traces this succession from Bodhidharma to the Chinese general Li Jing via ‘a chain of Buddhist saints and martial heroes.’ The work itself is full of anachronistic mistakes and even includes a popular character from Chinese fiction, the ‘Qiuran Ke’ (‘Bushy Bearded Hero’) (虬髯客), as a lineage master. Literati as far back as the Qing Dynasty have taken note of these mistakes. The scholar Ling Tinkang (1757–1809) described the author as an ‘ignorant village master.’

Sui and Tang dynasties (581–907 AD): Shaolin soldier monks
During the short period of the Sui dynasty (581–618), the building blocks of Shaolin kung fu took an official form, and Shaolin monks began to create fighting systems of their own. The 18 methods of Luohan with a strong Buddhist flavour were practiced by Shaolin monks since this time, which was later used to create more advanced Shaolin martial arts. Shaolin monks had developed very powerful martial skills, and this showed itself towards the end of the Sui dynasty.

Like most dynastic changes, the end of the Sui Dynasty was a time of upheaval and contention for the throne. The oldest evidence of Shaolin participation in combat is a stele from 728 that attests to two occasions: a defense of the monastery from bandits around 610 and their role in the defeat of Wang Shichong at the Battle of Hulao in 621. Wang Shichong declared himself Emperor. He controlled the territory of Zheng and the ancient capital of Luoyang. Overlooking Luoyang on Mount Huanyuan was the Cypress Valley Estate, which had served as the site of a fort during the Jin and a commandery during the Southern Qi. Sui Emperor Wen had bestowed the estate on a nearby monastery called Shaolin for its monks to farm but Wang Shichong, realizing its strategic value, seized the estate and there placed troops and a signal tower, as well as establishing a prefecture called Yuanzhou. Furthermore, he had assembled an army at Luoyang to march on the Shaolin Temple itself.

The monks of Shaolin allied with Wang’s enemy, Li Shimin, and took back the Cypress Valley Estate, defeating Wang’s troops and capturing his nephew Renze. Without the fort at Cypress Valley, there was nothing to keep Li Shimin from marching on Luoyang after his defeat of Wang’s ally Dou Jiande at the Battle of Hulao, forcing Wang Shichong to surrender. Li Shimin’s father was the first Tang Emperor and Shimin himself became its second. Thereafter Shaolin enjoyed the royal patronage of the Tang.

Though the Shaolin Monastery Stele of 728 attests to these incidents in 610 and 621 when the monks engaged in combat, it does not allude to martial training in the monastery, or to any fighting technique in which its monks specialized. Nor do any other sources from the Tang, Song and Yuan periods allude to military training at the temple. According to Meir Shahar, this is explained by a confluence of the late Ming fashion for military encyclopedias and, more importantly, the conscription of civilian irregulars, including monks, as a result of Ming military decline in the 16th century. Stele and documentary evidence shows the monks historically worshiped the Bodhisattva Vajrapani‘s ‘Kimnara King’ form as the progenitor of their staff and bare hand fighting styles.

From the 8th to the 15th centuries, no extant source documents Shaolin participation in combat; then the 16th and 17th centuries see at least forty extant sources attest that, not only did monks of Shaolin practice martial arts, but martial practice had become such an integral element of Shaolin monastic life that the monks felt the need to justify it by creating new Buddhist lore.[15] References to Shaolin martial arts appear in various literary genres of the late Ming: the epitaphs of Shaolin warrior monks, martial-arts manuals, military encyclopedias, historical writings, travelogues, fiction, and even poetry.

These sources, in contrast to those from the Tang Dynasty period, refer to Shaolin methods of combat unarmed, with the spear, and with the weapon that was the forte of the Shaolin monks and for which they had become famous, the staff. By the mid-16th century military experts from all over Ming China were travelling to Shaolin to study its fighting techniques.

Around 1560 Yú Dàyóu travelled to Shaolin Monastery to see for himself its monks’ fighting techniques, but found them disappointing. Yú returned to the south with two monks, Zongqing and Pucong, whom he taught the use of the staff over the next three years, after which Zongqing and Pucong returned to Shaolin Monastery and taught their brother monks what they had learned. Martial arts historian Tang Hao traced the Shaolin staff style Five Tigers Interception to Yú’s teachings.

The earliest extant manual on Shaolin kung fu, the Exposition of the Original Shaolin Staff Method was written in around 1610 and published in 1621 from what its author Chéng Zōngyóu learned during a more than ten-year stay at the monastery.

Conditions of lawlessness in Henan—where the Shaolin Monastery is located—and surrounding provinces during the late Ming Dynasty and all of the Qing Dynasty contributed to the development of martial arts. Meir Shahar lists the martial arts T’ai chi ch’uan, Chang Family Boxing, Bāguàquán, Xíngyìquán and Bajiquan as originating from this region and this time period. 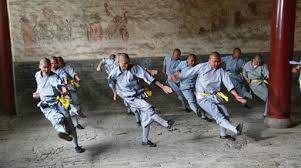 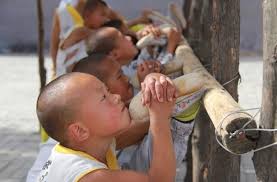 Pirates
From the 1540s to the 1560s, pirates known as wokou raided China‘s eastern and southeastern coasts on an unprecedented scale.

The geographer Zheng Ruoceng provides the most detailed of the 16th-century sources which confirm that, in 1553, Wan Biao, Vice Commissioner in Chief of the Nanjing Chief Military Commission, initiated the conscription of monks—including some from Shaolin—against the pirates. Warrior monks participated in at least four battles: at the Gulf of Hangzhou in spring 1553 and in the Huangpu River delta at Wengjiagang in July 1553, Majiabang in spring 1554, and Taozhai in autumn 1555.

The monks suffered their greatest defeat at Taozhai, where four of them fell in battle; their remains were buried under the Stūpa of the Four Heroic Monks (Si yi seng ta) at Mount She near Shanghai.

The monks won their greatest victory at Wengjiagang. On 21 July 1553, 120 warrior monks led by the Shaolin monk Tianyuan defeated a group of pirates and chased the survivors over ten days and twenty miles.The pirates suffered over one hundred casualties and the monks only four.

Not all of the monks who fought at Wengjiagang were from Shaolin, and rivalries developed among them. Zheng chronicles Tianyuan’s defeat of eight rival monks from Hangzhou who challenged his command. Zheng ranked Shaolin first of the top three Buddhist centers of martial arts. Zheng ranked Funiu in Henan second and Mount Wutai in Shanxi third. The Funiu monks practiced staff techniques which they had learned at the Shaolin Monastery. The Wutai monks practiced Yang Family Spear (楊家槍; pinyin: Yángjiā qiāng).